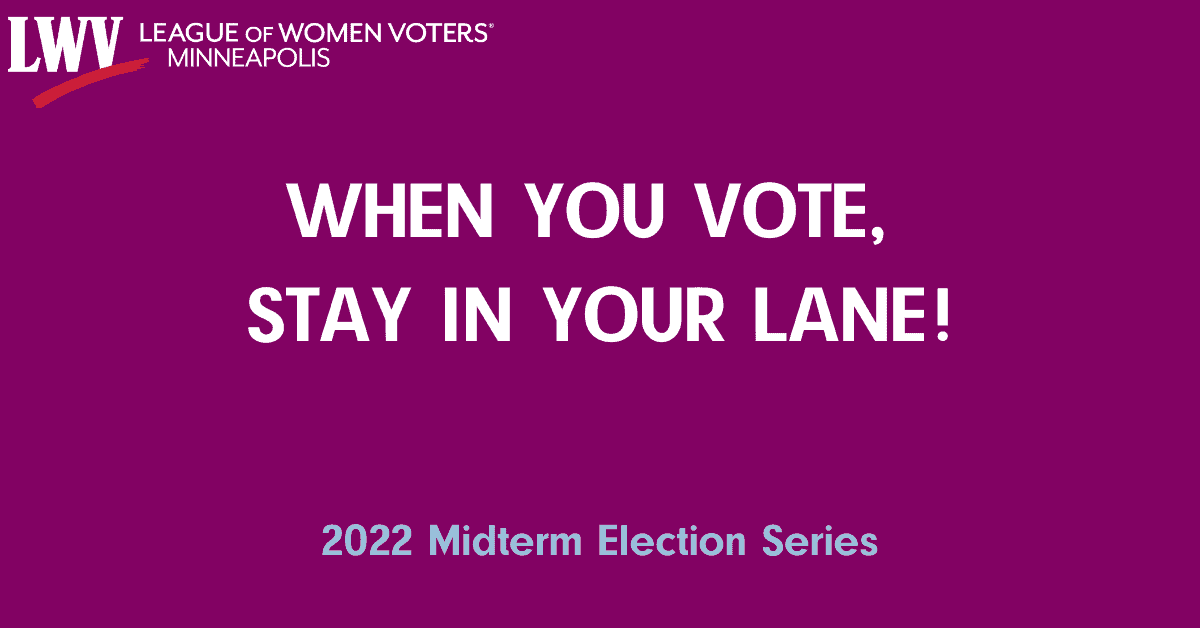 The Primary Election on August 9 will determine the candidates for the General Election. The top vote-getter in each Primary race will appear on the ballot in November. In Minnesota, any registered voter can participate in the Primary, but there’s a catch. You must stay in your lane.

In some states, voters must “declare” their party affiliation in order to receive the corresponding Primary ballot. But, in Minnesota, voters are not required to declare their party. Instead, candidates for all major parties appear on every ballot. But note: If you cross political party lines by voting, for example, for a Democrat in one race and a Republican in another, your ballot is “spoiled” and will not be counted!

Candidates in the same party will be listed in the same column, so stay in your lane as you vote down the ballot. You don’t have to vote in every race, but you may not cross columns on the ballot.

Some candidates will be designated as “endorsed” by their party. Endorsement is a stamp of approval or sign of preference from the party’s delegates who were selected at precinct caucuses (back in February – remember those?)

But, there’s more. Nonpartisan offices like School Board, County Attorney and Sheriff will be listed on the back of the ballot. In these races, the two top vote-getters move on to the General Election.

Preregistration for the Primary ends JULY 19. However, you can also register at an early-voting site or on election day at your polling place. Early voting begins on JUNE 24 and continues through AUGUST 8. Or you can submit your ballot by mail.

Your vote is powerful, especially in the Primary Election, because compared to the General Election, many fewer people turn out for the Primary. Be sure you’re someone who does.

To request an absentee ballot, register to vote or for more information, visit vote411.org.