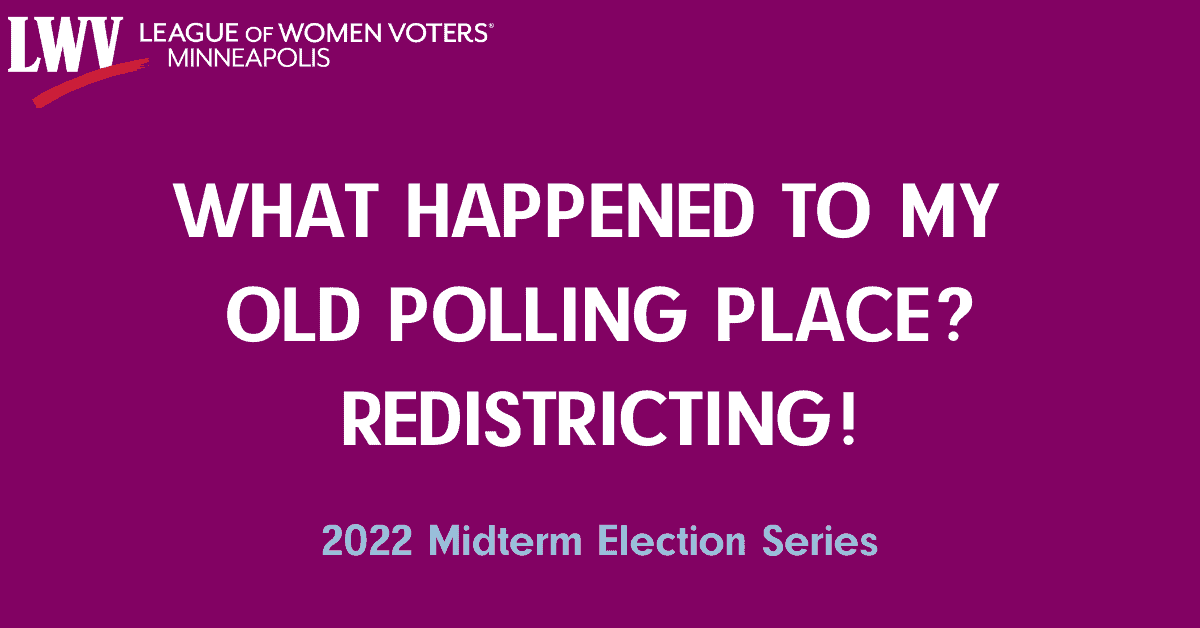 It’s spring—flowers are blooming and the Hennepin County Elections office will be sending out
postcards to registered voters. You may find that your voting district and polling place have
changed. What’s happened?

In 2022 many people are experiencing this change in their voting area. This process,
redistricting, happens every ten years as states, counties, and cities across the country adjust
their political boundaries to fit new census numbers. Because the population of Minnesota has
changed, the sizes and boundaries of congressional, state, and local districts need to change so
that each has approximately the same number of people. That way the value of each vote stays
equal.

In Minnesota the process starts with the legislature and governor. The political parties redraw
maps for our eight congressional, state legislature, and metropolitan council districts. It can be
tempting for parties to try to design these areas for their own particular advantage, sometimes
resulting in weird shapes and unusual inclusions. This is called gerrymandering.

Our system in Minnesota is set up to avoid gerrymandering. Here, when the parties and the
governor don’t agree, as has happened for the past 50 years, the Chief Justice of the Supreme
Court appoints a redistricting panel to draw new boundaries. The panel completed its work in
February.

With congressional and state legislative boundaries determined, local redistricting begins.
Cities, county boards, and school districts set their own local boundaries. In Minneapolis our
Charter Commission, with the help of an advisory group and input from the community, draws
the maps for Park Board districts and the city’s wards and precincts.

Groups charged with adjusting voting districts are subject to specific rules, such as creating
districts that are convenient for voting and are approximately equal in population. They also
should make sure that voters who belong to communities of color or Native American tribes are
able to fairly elect their representatives.

When local maps are completed and approved by the Minneapolis City Council and the Park
Board, notices of updated polling places will be sent to all registered voters. Thus, before the
primary election, we will know if our district and precinct have changed and where we can vote.
The process itself, with all of its approvals and bipartisan committees, ensures that our vote is
equal to one in any other part of the state. It’s good to know that we have as much clout as any
other voter.