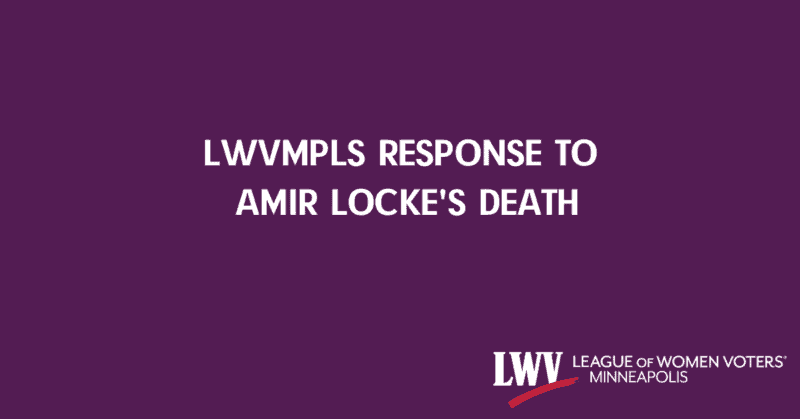 League of Women Voters Minneapolis sends our sympathy and support to the family and friends of Amir Locke. Amir was shot dead by Minneapolis police last week during a SWAT team, “no-knock” raid at a private city residence. We are saddened that Minneapolis is once again in the spotlight for actions of the Minneapolis Police Department that led to the death of a young black man.

LWVMpls has taken positions on police and public safety that call for cultural reform in the Police Department including:

We once again insist that City of Minneapolis leaders, particularly Mayor Frey and Police Department hierarchy, follow through on their commitment to reform the Minneapolis Police Department. We ask city leaders to work together to protect ALL of our citizens against excessive use of force. Controversial “no-knock” raids, which have been banned outright in several cities across the U.S. and have not been used in St. Paul since 2016, should not be an acceptable police tactic in Minneapolis either. We ask our city leaders to uphold their promise to address systemic racism and to rebuild public trust. This is not too much to ask. Our citizens’ lives depend on it.