On September 19, 1919, seventy-one years after the Seneca Falls Convention, which advocated for the rights of women, the Minnesota Legislature ratified the 19th Amendment in a special session. Using tactics from information campaigns to civil disobedience, national suffrage associations won the right to put the Amendment to the states for ratification.

As each state ratified, members of the National American Woman Association (NAWSA) realized the challenge of educating all these new voters. They voted to continue their work through a new organization, the League of Women Voters.

The Minnesota Suffrage Association dissolved on October 7, 1919 and passed a resolution to—"become… a branch of the national League of Women Voters for the purpose of completing full enfranchisement of women and increasing effectiveness of women's votes for better government."

Read more about the LWV MN history and view pictures from the Minnesota Historical Society.

By 1920 the League of Women Voters of Minnesota (LWVMN) had a chairperson in each congressional district and an estimated membership of "at least" 14,000, including women who belonged to other organizations who agreed with LWV objectives. Because it had built its state organization so fast, Minnesota was hailed as the "Banner State" at the 1921 National Convention.

Promoting active citizenship was the LWV’s initial concern, and it conducted schools nationwide to inform the public about voting and the principles and structure of government.

In October 1920 the Fifth District (Minneapolis) League distributed 226,655 pieces of literature prepared in its own office, gave 99 talks, presented a play about voting before 60 organizations, maintained information booths in all the big stores for two weeks before the election, and recruited and trained more than 200 women to act as election judges. 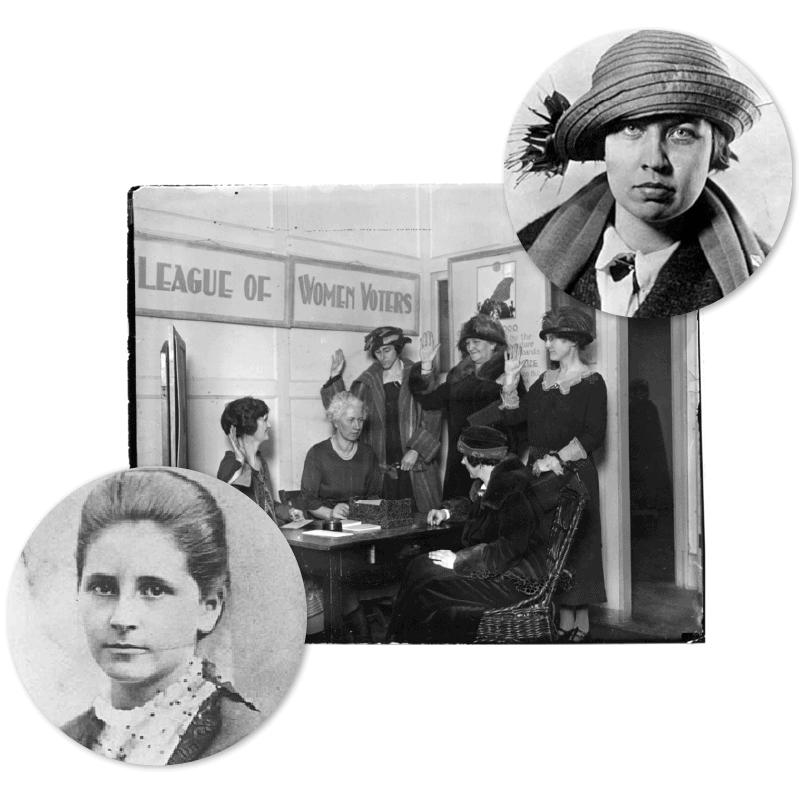 Photos from left to right:  Clara Ueland, the first President of the League of Women Voters Minnesota; LWV swearing in new members or registering them to vote; Myrtle Cain, in 1922 is elected the youngest woman legislator in the country

The 1930's: The Depression Years and War

During the ‘30s many federal laws were passed that included LWV-supported features - unemployment insurance, Social Security, and material and child health programs.

By mid-decade it was apparent the program had grown too extensive to manage. The LWV narrowed its emphasis to two issues:

The shadow of war loomed as early as 1931. LWV urged U.S. membership in the League of Nations and persisted in its efforts to get the Senate to ratify the World Court, but without success. LWV believed that war could be prevented by international cooperation and held that: "Peaceful change through the achievement of economic and social justice is the best method of preventing war."

From left to right: Mabeth Hurd Paige, one of the first 4 women members of the Minnesota House of Representatives; Lena Olive Smith, the first African American woman licensed to practice law in Minnesota

Long before Pearl Harbor, LWV opposed the principle of the Neutrality Acts—that the U.S. should treat all belligerents the same. Although not all members agreed, and some resigned in protest, LWV supported Lend-Lease. A program that called for price controls, rationing, higher taxes and especially a new world system of collective security.

When the Dumbarton Oaks proposal for the United Nations was presented, the League began an intensive campaign in support. Also strongly supported were the push for civilian control of atomic energy, the European Recovery Program and the concept of world trade.

The LWV maintained its support of the United Nations and of programs to help other countries through economic aid and technical assistance. The League urged a more liberal trade policy.

The excesses of the Joseph McCarthy era brought about the Freedom Agenda, a League program to promote discussion of individual liberties under the Constitution, and a study of the federal loyalty-security system.

The American Legion attacked LWV's Freedom Agenda because someone had accused one of its authors of communist sympathies. The Milwaukee Journal, one of many newspapers supporting the League, said: "They (Legion officials)... have blustered into battle with the League of Women Voters of the U.S. Their own choice of a battleground being patently untenable, they can only retire in disorder, looking foolish..."

The early ‘60s saw the first edition of Indians in Minnesota, written by Elizabeth Ebbott of the Mahtomedi Area. Published by LWV, the book examined the preservation of indegenoius culture and sovereignty in a shifting political landscape.

The Council of Metropolitan Area Leagues (CMAL) was developed, composed of Leagues in the seven-county area. CMAL deals with questions of metropolitan significance.

While LWV had taken a stand against racial discrimination years before, the '60s saw vigorous study and action at the U.S., state and local levels against discrimination for any reason. It also studied and supported anti-poverty programs.

The LWVUS adopted a study of U.S.-China relations. At the height of the Vietnam War, relations with China were non-existent and the idea was suspect. The League sought to bring the idea to the mainstream, remaining consistent in its message that peaceful change would avoid war.

From left to right: President Lyndon B. Johnson signs the Voting Rights Act of 1965 with Martin Luther King Jr and others in observance; Women march for equal rights to vote.

The 1970's: Education and Equal Rights

The Hennepin County Leagues of Women Voters, with representatives from county Leagues, became active and published a lengthy report on county government.

Toward the end of the decade, efforts focused on passing the Equal Rights Amendment.

In 1980 LWV Mpls began training city election judges. After experimenting with various ways of doing the job, the League produced a video called "A Day in the Life of an Election Judge."

In 1982, the Legislature, with strong lobbying by LWVMN, passed legislation requiring comparable pay in state employment. The following year it passed a similar bill requiring all local governments within the state to follow suit. LWVMN published Pay Equity: A Monitoring Guide for organizations monitoring local compliance with the law.

LWVMN issued the 4th edition of Indians in Minnesota, this time published by the University of Minnesota Press. In 1985 LWVMpls once again published an updated version of A Guide to Local Government.

In the spring of 1990, the LWV Mpls voted to study the issue of race and published Reflections on Race in 1991. It was widely used as a training tool by corporations.

In early 1991, the LWV Mpls voted to evaluate its structure. This resulted in the first multi-year strategic plan and became the catalyst for the 75th Anniversary Campaign to raise awareness, initiate projects, and secure the LWVMpls’s financial future. The first goal of the campaign—motivating citizens—led to expansion of candidate and issue forums and a renewal of interest in observing government meetings. The second goal—to strengthen communities—created the Young Women's Community Leadership Project , in which the League shared leadership practices with underserved high school women. That goal also prompted LWVMpls to provide extra support to neighborhoods, through facilitation, partnership and housing tours.

In 1993, the League published Valuing Children: The First Step—Early Childhood Care and Education in Minneapolis.

Guided by goals in four areas of Program, Membership, Image and Financial Strength, in the 2003-06 Strategic Plan, LWV Mpls further focused on its core mission in a 2006 Plan to expand and improve voter information; grow and sustain membership; and maintain effective planning, operations and funding to support mission and goals.

Voter education work focused on providing information and support to new voters, such as eighteen year olds and new citizens voting for the first time. Collaborations with community and diverse organizations support this important work. Thus the basic work of LWV Mpls, still done by volunteers from the organization, is not too different from that of its founders—helping citizens understand their voting rights, and how to exercise them, and being informed and acting on issues of concern in the community—democracy in action.

THE 2010's: CLIMATE AND HEALTHY COMMUNITIES

LWVMpls sought to expand its reach by collaborating with like minded organizations and communities of color to address the health of Minneapolis. From these collaborations, LWVMpls began to host our Healthy Legacy forum. The topics covered have included Toxic Chemicals, Climate Change, Urban Agriculture, Water Quality, and Advancing Health and Racial Equity. The Pre-cradle to Kindergarten forum brought the arts, food, and expert panels together for discussion and action.