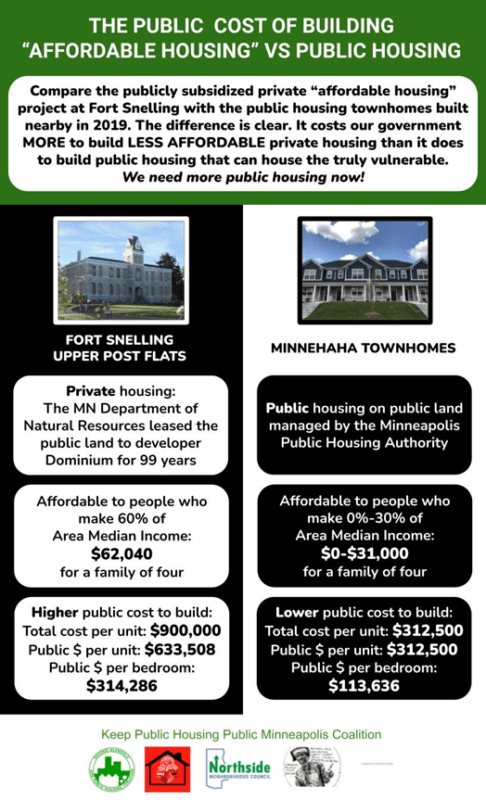 The Ft. Snelling Upper Post Flats (Ft. Snelling unorganized territory) is a soon-to-open “affordable” housing complex developed by local for-profit real estate tycoon Dominium. The development involves the renovation of Ft. Snelling’s Upper Post buildings and is located less than a mile from the Ft. Snelling Blue Line Light Rail station. Once open, one- and two-bedroom units at the Upper Post Flats will rent for $1,200 and $1,400 respectively. These rents are considered “affordable” because they are feasible for someone earning 60% of Area Median Income (AMI). However, because AMI is calculated across the entire Twin Cities metro area – including wealthy suburbs – 60% AMI for a family of four equals $62,040. This is well above the average incomes of Black or Native American individuals in the region. Although Dominium will offer “first priority” to lessees who are military veterans, veterans are not guaranteed housing at the Upper Post Flats, especially if they cannot pay the steep monthly rent. The Upper Post Flats are the most expensive development project in Minnesota history, with a total construction cost of about $900,000 per unit.

On November 3rd, 2020, Dominium secured $88 million in public bonds from Hennepin County. Only three Hennepin County commissioners – Angela Conley, Irene Fernando, and Mike Opat – voted against the bonding. While these bonds will theoretically be paid back in the long term, they were necessary to secure two other crucial public subsidies. First, because building the Upper Post Flats will involve the preservation and renovation of the Ft. Snelling Upper Post buildings, Dominium will be awarded $58 million in state and federal historic preservation tax credits. More egregiously, Dominium is now able to claim a $63 million Low Income Housing Tax Credit (LIHTC). State and federal regulations require that a development secure local bonding before claiming such credits, meaning that by providing the controversial bonding, Hennepin County Commissioners made it easier for Dominium to claim even more public money. Because corporate tax credits like LIHTC result in reduced government revenue, they are effectively public subsidies.

Minnehaha Townhomes (Public Housing)  – the Minneapolis Public Housing Authority’s most recent development – opened in 2019. It is located less than 2 miles from the Ft. Snelling Upper Post-development and is also within a mile of light rail transit (VA Medical Center Blue Line Station). Out of the Townhomes’ 16 units, 4 are reserved for families transitioning into housing from long term homelessness. All units are reserved for people earning under 30% of Area Median Income and all are now occupied by formerly unhoused families, including 50 children. Families pay 30% of their actual income for rent. The average annual income for a family of four living in MPHA properties is $20,656. At a total construction cost of  $5 million, the Minnehaha Townhomes project put a previously vacant lot to use, providing more public housing at a lower taxpayer cost, both in the short and long-term. If we were to build 191 units of public housing (the same number of units as the Upper Post Flats) at the per-unit construction cost of the Minnehaha Townhomes, it would only cost $59,687,500 – half the amount of public money being given to Dominium to build the Upper Post Flats, which will be unaffordable for the unhoused, low-income renters and public housing residents. Public housing is a more sustainable way to ensure equitable and real affordable housing because it doesn’t allow for the government to give handouts to corporate developers like Dominium.

← Program Planning RecapIn League With Young Voters: Turning Out the Vote in 2021 →
Scroll To Top